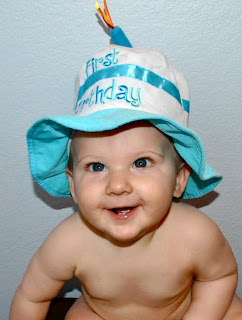 Our 12 month check up appt was today! We are on the charts now. His height is 31" (85%) and weight is 27 lbs 6 oz (95%). He got three vaccines and I am going to delay the MMR. DRAMA. That's for another post though.
Signing
I forgot to add about signing yesterday. I knew I'd forget something. Anyway, he has three signs- all done, more, and please. I think we'll work on again on the sign for eat and drink. Then we'll start working on "thank you". Manners are super important to me and I hope he catches on.
Eating
Will is eating just about everything we are. It's mostly table food, but I'm still giving him purees occasionally if I'm out of other things and I need something for him. He is still a great eater and will try anything I give him. We are working on using a spoon and fork, but he's not quite getting it yet. He likes to try though. We had to discipline him last night at dinner. He kept throwing handfuls of rice and chicken on the floor and in the air. I told him no twice and then tapped his hand with my "I'm an angry mommy" face. He cried and then did it again. What a stinker. I'm worried my child is going to be as rebellious and stubborn as I am.
Milk
After he got sick the last time, I wasn't sure if any it was due to moving him to whole milk. So I decided to take him off and put him on a toddler formula- Enfagrow. He has 8 oz three times a day and I'm going to ask the doctor tomorrow about this. I want him on milk- good grief formula is too expensive! I don't know if we'll have to try something other than cow's milk though.
Walking
He is walking better every day. Still wobbly sometimes and he falls a lot. That makes him really mad! I'm trying to ignore the little falls in hopes that he'll get over it quicker and not be so whiny. He doesn't want us holding his hand either.
Naps
Two naps (sometimes three if he seems really tired). Morning nap at 9 lasts about an hour and twenty minutes and a 3:00 nap that lasts around 1-2 hours. (EXCEPT not today unfortunately!!)
Talking
No new words. Still no mama! He says dada, hi, cookie, cracker, car, ball... I think that's it. Everything is a cracker though and he can spot a ball anywhere. I talk to him, read to him, label things and explain everything I'm doing, but he's not really catching on yet. I figured he'd be a late talker, and he has until now, so I'm trying to be patient with the little booger.
His favorites
OUTSIDE! He wants to go and be outside all the time. He gets so bored indoors and cries when it's time to come in. I try not to keep him out too long though b/c I don't want him sunburned and overheated. I keep sunblock on him, but he won't wear a hat so I worry about his fair little head. He also loves to play with balls. He loves watching Sesame Street's Favorite Songs 2 & could watch it 4 times in a row if I let him (which I did when he was sick). He loves crackers and cookies so much. He loves playing "boom"- a game we made where we let him fall back on the bed while saying, "BOOM!". Dancing! He's a little dancer like his Mom and Dad. He also loves seeing birds outside, flowers, and planes in the air. He smiles every time.
His dislikes
Oh boy, this kid HATES having his diaper changed. He cries every time. He doesn't like being put to bed still. He really doesn't like the doctor at all. Not at all. Playing alone- this is a problem we have to work on. The church nursery- flips out everytime. It makes Sundays so hard and almost pointless for me to go b/c I only get to focus on him most of the time. It's a problem.
Our bad habits
We still use a paci. I originally thought I'd get rid of this a lot sooner, but it really helps calm him down sometimes and we really only use it at sleeping times.
We let him sleep with us after his 5 am waking. It usually buys us another hour or two of sleep.
Last, he sticks his hand down my shirt looking for... well you get the idea. It's a comfort thing. I try to not let him, especially when we're in public, but when he's upset or tired I just let him b/c it helps him calm down or go to sleep. It's bad, I contribute to it, I'm working on it.
Vaccines
He's supposed to get a ton of vaccines at his one year appt, but I'm not sure what I'm going to do about them yet. I plan on talking to the doctor, but I know he's for them all. The MMR really freaks me out. I think I'm going to delay it, but my mind isn't completely made up yet.
Mood
Generally he's a happy boy, but the past few days he's been so cranky. I don't know if it's a combination of being sick (a stomach bug that I think is finally done), teething, milestones, frustration, or boredom. I'm one tired and frustrated mommy though. I miss my sweet boy. Hopefully this crankiness will pass soon!
Written by Kristie around 1:23 PM