On Saturday Will turned 8 months old! He has really started to do some really fun new things too. Of course, with every milestone I just think, "He's never going to get it!" and then one day he just does it. When he was tiny, I thought he'd never lift his head. Then I thought he'd never start cooing. Then it was rolling over... rolling the other way... getting onto his hands and knees... sitting up... eventually he has done all of these things. I had starting thinking he would never do the army crawl thing, but about a week ago he finally figured it out! Now if we could just crawl and start some consonant sounds... I know, I know.... be happy with him just where he is! I have to tell myself that every day!
He sits really well and can lean to reach for things and then get back onto his bottom. He can get from his bottom to his tummy without completely face planting most of the time. He can really cruise in his walker! You really have to watch your feet and shins b/c he will ram you. He chases Dex all over and can get basically anywhere that there isn't carpet. We think he is starting to wave and trying to say, "Hi". It sounds more like,"Ha", and he isn't very consistent, but he's working on it! Also, we think he's learning the hand sign for "eat". Just last night he finally starting making a "b" sound! I was really excited b/c I've been a little worried about him not making any consonant sounds yet. I know I'm nuts! He wants to walk everywhere all the time- holding our fingers of course.
His most fun game lately is yelling, "Ah" and then waiting for us to "ah" back at him. We will go back and forth for a long time. He just thinks it's so much fun! We think it's quite cute. 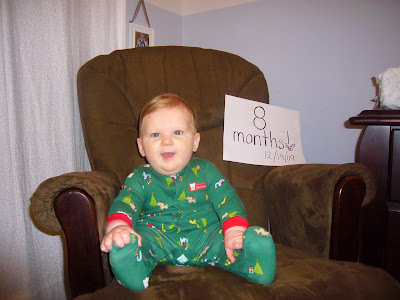 These were taken in the morning when he was still in his jammies. 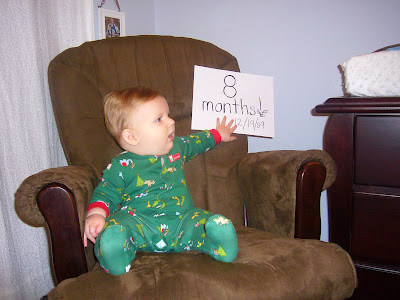 He finds that paper way too fast now. 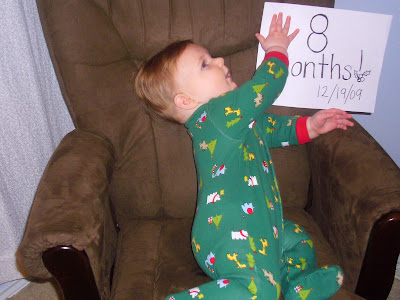 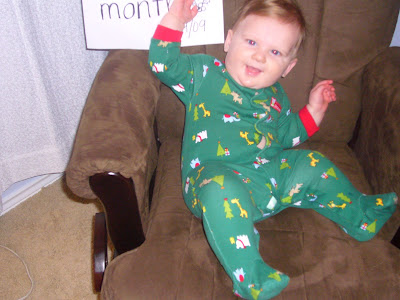 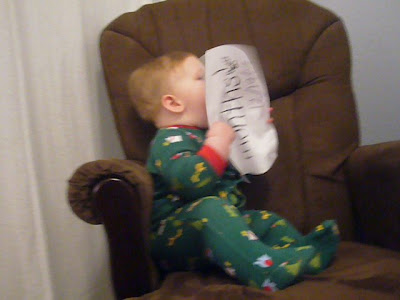 The past 8 months have been so wonderful. We were just saying last night how much easier things are getting now that he is just a little bit more independent now. I can't wait to see what fun and exciting things this little guy is going to learn this month.
Our love for this boy is beyond explanation!
Written by Kristie around 9:07 AM No comments:

Email ThisBlogThis!Share to TwitterShare to FacebookShare to Pinterest
Labels: milestones 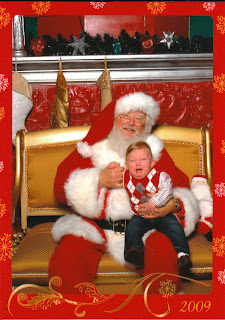 Written by Kristie around 2:46 PM 2 comments:

Just wanted to let my 3 committed readers know I'm still here, but not able to post. We've had a lot going on and now we have a baby who is sick with his first cold. Sinus infection to be exact. Very stuffy noses mean not able to eat well, sleep with paci, or use paci to stop crying... basically just misery around here.
Anyway, will post again as soon as our little nose stops blowing green bubbles.
Written by Kristie around 5:02 PM 2 comments:

This is our Nativity Set. 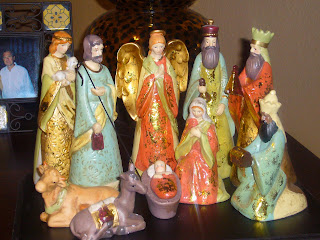 This is our baby Jesus... 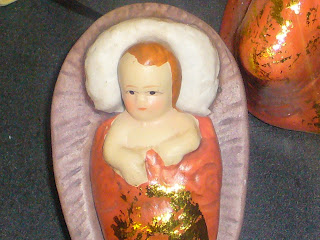 We spent this past Saturday fixing up the house for Christmas. It's always so exciting and also exhausting! We still have one of those trees that you have to put together branch by branch. In all, it took about an hour and a half just to put the branches and lights on. Whew! We don't have a ton of Christmas stuff, but it never fails to look like a bomb went off in our house. Then we moved outside and put lights up on the house. Will amazingly slept through almost of it and was very interested when we brought him out of his room. I'm so lucky to be married to someone who loves Christmas as much as I do. We played Christmas music and put Will in some new Christmas jammies.
*We even had snow yesterday (which didn't stick) and should be getting more on Friday! 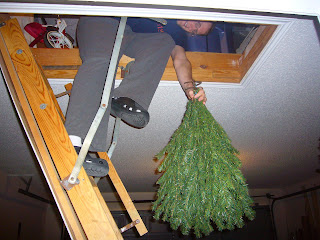 The tub we keep the branches in is so huge and heavy, it's just easier to bring the branches down in a few bunches at a time. 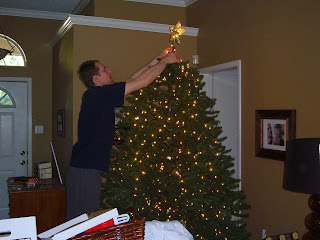 Steven trying to put on the star. 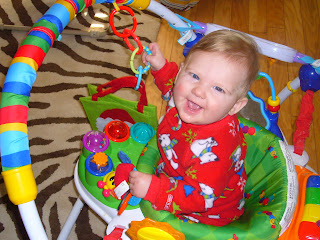 Will in his Christmas jammies was very excited about the tree! 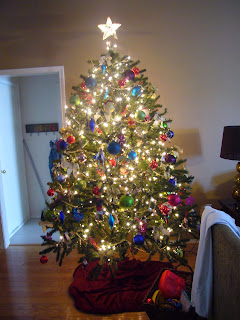 Please ignore the junk all around. 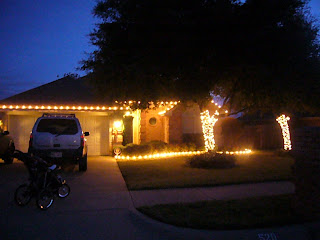 When You're Married to a Musician.. 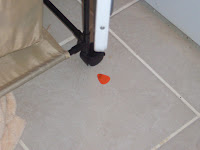 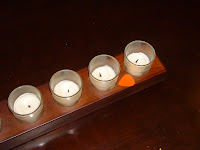 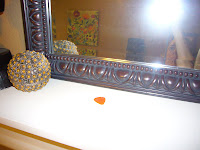 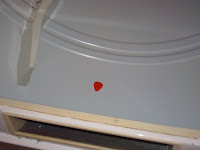 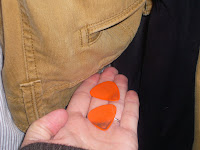 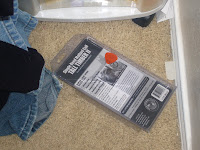 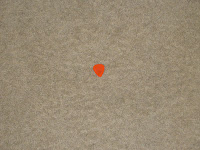 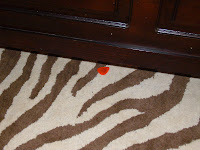 ...you find guitar picks all over the house. This is ridiculous. I have found more since these pics were taken & even found one at my Mom's house. Out of control!

Written by Kristie around 10:17 AM No comments: