Geez, I know it's been a long, long time since I've blogged.  Life is so busy during the day and at night I just usually crash.  I'm pregnant, have an almost two year old to plan a party for, a big boy room to get read, a nursery to set up, we've had a house flood, and my dog ate rat poison- most of the craziest things happened in about a week's time.  Blogging has been way down on the list.  I also don't like posting with pics, but our camera for some reason isn't connecting with the computer... anyway, here is the update on what's up with the Lentz's lately.

MY BOY
Will is going to be 2 in just 8 days!  Sometimes I can't believe it's been two years and sometimes I can't believe it's only been two years.  I can hardly remember when he wasn't here.  He is such a funny little guy and keeps us very busy.  I don't really like the phrase "he's all boy", what does that really mean?  That some little boys are partially girls?  It's hard though to find another phrase to describe him, he is your typical rough and tumble boy.  He likes rocks, sticks, dirt, getting dirty, wrestling, jumping off of everything, climbing, playing basketball and soccer.  He is AWESOME at basketball by the way.  I took him to Peter Piper pizza and played a kids size bball game.  He was shooting and making more than me!  He plays all the time on his little goals and always wants to shoot on Daddy's goal.

He is very sweet though too.  He gives us hugs and kisses all day.  It's my favorite- even at 4 am.  I love that he gets excited to see us when we come home from somewhere or wake up in the morning.  I hear "Mama woke up!"  followed by a hug when Steven lets me sleep in.   He's also very polite, saying "pease Momma" or thank you without being prompted most of the time.

He is starting to become a pickier eater and will tell us "don't like it" if he's not in the mood.  He is extremely stubborn (that's from Momma).  I've known from the time he was tiny that he'd be a fit thrower and he is proving me right.  He learned the word 'now".  At first it was cute- "it's working now" or "we're home now".. but then turned into "Red juice, NOW!".  I'll say, "No Will, we don't say now" and he'll say, "Red juice, pease Momma".  We're working on it.

He knows all his colors, but gets pink and purple confused.  Shapes are all down- even crescent and hexagon most of the time.  He only knows a few letters and will only count to 2 - occasionally 3.  We'll ask him a hundred times a day to count something and he'll say, "12121222112" and smile.  We are working hard to move to three and then he'll just say "one three".  I'm not stressing or worried about it and am surprised by that considering I was a teacher, but I know boys are different and learn those things slower.  He is just NOT interested in ABC's 123's or POTTY TRAINING.  He refuses and I'm not going to force it.  Yet.  It does stress me a little considering he's two and a new baby is coming.

One thing I have to praise God for is the success we've had at church.  He started screaming in the nursery when I left him starting at 8 months old.  He would scream the WHOLE time and I'd have to get him.  It got to where I dreaded even going.  The past three or four months have incredible.  He gets excited to go and chants "Let's go, church, church, church!" in the car on the way!  It makes my heart so happy.  He loves getting to see his little friends and play.  THank you Lord! 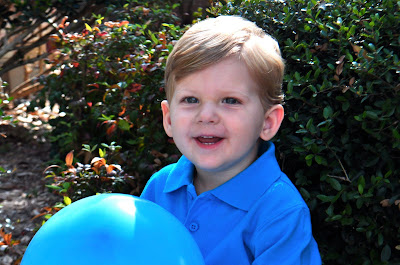 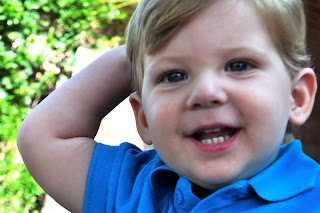 I'll have to do another post soon about my boy, because honestly I could go on forever.  Love isn't even a strong enough word, but it's all I've got- LOVE HIM.


BABY
I am 23 weeks now!  My tummy is getting bigger every day.  This is a very active little girl.  I've only purchased ONE baby girl item.  Can you believe that?  My mom has gotten a few things and Steven's mom too, but I just haven't yet.  I'm not a big shopper anyway and plan on working on those things more this summer after my job is done.  At 20 week sono, baby girl was measuring 2 weeks ahead and about 14 oz.  Maybe she'll be a big girl like Will.  It still amazes me everyday that a baby is in my tummy.  I'M MAKING A PERSON!  So crazy.  It's a little overwhelming to think I only have about 4 months left before she's here, but we cant' wait to meet her.  I love her so much already and am ready to add to our family.

HOUSE
Things are a mess around here right now.  Our washing machine broke and flooded the house.  All bedrooms and the living room need new flooring.  They boxed up a bunch of stuff and moved it to the garage.  Our things are everywhere and in crazy places.  It's like moving and remodeling at the same time.  We were displaced from our house for about 5 days.  All the carpet is gone from the bedrooms, leaving concrete, and Steven is working on ripping out the old wood floors.  It's a really hard task.  It's glued down pretty well and doesn't want to come up.  Everything is covered in white powdery stuff and saw dust.  We had been planning on painting and now need to do it before we put the new floors in.  So this week my husband is going to be super busy priming, painting, demolition, and learning to install new flooring. 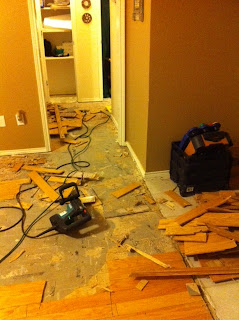 This was last night.  Our living room.  Thankfully Will stayed with my Mom last night so Steven could work the night away ripping the floor out.  What a mess!
It's a huge inconvenience, but a huge blessing.  We hated all our flooring anyway and now we get money to replace it.  I've just had to relax a bit and not get stressed about living in a construction zone with a toddler.  And being pregnant.  And trying to plan a party.  And set up Will's big boy room so we can get him out of the nursery and then change that nursery into a girl's nursery.  Just a few minor projects. :)

This is way too long already so I will wrap up.  Hopefully I'll be able to make myself be more consistent about updating.  If you're still reading, thanks!  Soon I'll have pics of a two year old and a remodeled home!

Written by Kristie around 5:51 AM 3 comments: