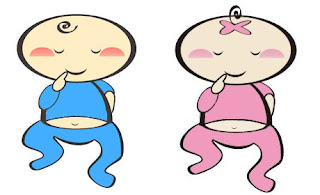 December 16th is the big day when we will find out whether we will have a son or a daughter!  What a crazy thought.  I mean, we have one right now, we just don't know what it is... and getting tired of saying "it".  We had an appointment yesterday and everything went great.  We heard that sweet little heartbeat.  It was at 150, which our doctor said was "perfect".  It's so surreal when you are listening to that fast "whoosh-whooshing".  We know there's a baby in there, but when you hear it's heart beating- reality hits you in a whole new, precious, holy cow- kind of way.  I was sick throwing up last night and then again this morning, but I always feel better afterwards.  I guess that's just something that will happen from time to time.  Not fun, but if that's what it takes...
Steven is driving to DBU right now to drop off some canned goods so he can get his library fines forgiven.  We won't even get started on my library fines... let's just say I won't be using the Burleson public library or Fort Worth library for awhile.  (videos do not have the same late fee as books just so you know!  and yes, they were being used at school)  After he gets back, we are going to pack up and head to my parent's house.  We will spend Thanksgiving there.  I can't wait.  Eat, watch tv, sleep in the living room, and repeat.  Perfect.
Friday we will head to Belton to spend some time with Steven's parents and his brother's family.  We don't get to see them enough.  It's always a nice, relaxing time for us.  Plus, I know Steven is looking forward to his mom's pumpkin pie.
Hopefully the next few days will pass slowly. After that though, bring on the time warp- I just can't wait until the 16th!  I'm still feeling boy... but we'll see!
Written by Kristie around 6:53 AM 2 comments: 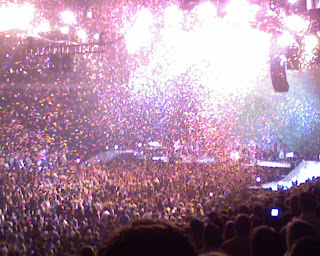 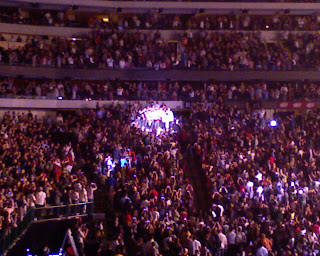 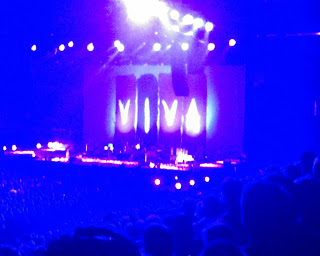 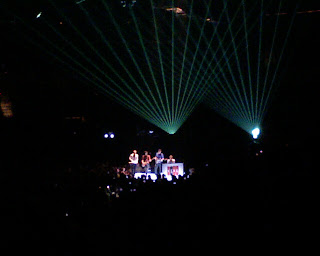 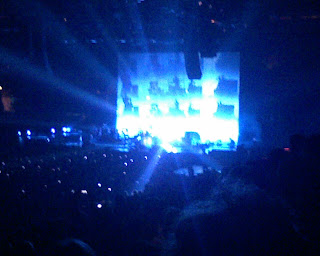 Last Wednesday night, Kristie and I went to see Coldplay at the AAC.  We went with the Clark's. After finding our seats, you always wonder what kind of folks you are going to be sitting by. You find out really fast after the band comes out for the first time. This middle aged lady with Dallas hair was on our right with some guy.  When Coldplay came out the guy started pointing at the sky and put his hands in his face, and the lady started shaking her hair all around and dancing.  I switched places with Kristie so she could see (she's just a little one) and the lady proceeded to slap Kristie in the face with her hair the entire night. Danny and Christina told us later that they had two intoxicated women making out in the row in front of them. Concerts, you never know who you're going to sit by.
Coldplay was unbelievable. I tried not to go too crazy, but there were times when it was like too good to be true. The sound was so perfect and loud. Laser lights (which Danny hopes are in heaven), video balls, confetti, Tony Romo.  They played a few songs up in the crowd.  If you haven't bought Viva La Vida, I am not sure what you are doing, but you need to stop.  You also should probably buy their new EP.  I bought a $20 program that is a freaking masterpiece, I don't know if I should open it or hang it on the wall.  Maybe I should chop it up and hang it next to my Stryper poster in the office.
Is it possible to worship God through Coldplay? I don't know, but I think I did. When I hear really amazing music, even if it is not Christian, I always want to praise God. If you only listen to one song, download "Fix You" and listen to it 5 times in a row. After you finish weeping, listen to it again. Unbelievable! The Brits have it together. Come on America!
Written by Kristie around 7:46 AM 2 comments:

as far as I'm concerned it's the Christmas season!  I do love, love, love Thanksgiving, but I am one of those people who can't wait for Christmas.  Yes, I will put up my tree this week.  Yes, I will start listening to Christmas music.  Yes, my dog will wear antlers and little booties with bells.
Written by Kristie around 7:23 AM No comments:

Ok, so we are officially the absolute worst bloggers on the web.  At least we made the Penn B's feel better about themselves for a while.  Things have just been a little crazy around our place since school started.  Blogging was the absolute last thing on my list.
The biggest bit of news is that WE ARE EXPECTING!!  I am 17 weeks pregnant and am due in May.  Cinco de Mayo to be exact.  (I've already promised my coworkers if it's born on that day our baby will be named Juan.)  We found out we were pregnant on the first day of school, August 26th, and for the majority of time since then I have been horribly sick.  I was not sick at all though with my last pregnancy, so I did find some comfort in the constant nausea.  I've finally turned a corner, but for while there I didn't know if I'd make it!  I was sick from the minute I woke up to the minute I went to sleep, around 7:00!  Eating was just torture, everything smelled bad, looked bad, and tasted differently.  I could barely get out of bed after I got home from work.  God bless my poor husband who has picked up every household duty there is.
Lately though my energy is coming back and I'm able to eat more.  I don't have too many cravings, mostly just pizza.  I'm not at the point yet of wanting to eat non-stop either.  Things are definitely changing though.  My lower abdomen muscles are sore and I get sharp pulling pains if I stand up too fast.  Also, if I feel a sneeze coming on, I quickly have to pull my legs to my chest so I don't pull those muscles.  My tummy is growing, but it's mostly just obvious to Steven and I.  I haven't felt any little "flutters" yet from the goldfish, but I'm hoping to soon.
It's just a crazy thought- I'm actually growing a little person, will go to the hospital to push it out, and then decide to bring it home with me.  Just bizarre.  And absolutely incredible.
We feel so unbelievably blessed though.  God has been so gracious and good to us.  We try not to take a day of it for granted and spend every minute already thinking about our little one who will be here soon.
This week the baby should be about 5 inches- about the size of a baked potato.  We have an appt. on Tuesday morning to hear the heartbeat.  We have decided not to do the "quad" testing (I think that's what it's called).  It seems to be the right decision for us.  They could tell us the sex, but won't do another ultrasound until 20 weeks.  Hopefully we'll get to find out before Christmas and not after.  That would be the best Christmas gift!  We are pretty sure it's a boy, just a feeling though.
Hopefully we'll have some pictures to post soon.  The following is of course not our baby, but an image of what ours should look like about now! 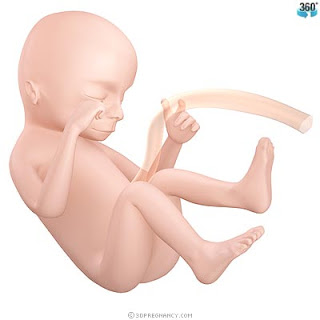 http://3dpregnancy.parentsconnect.com/copy-image/
Written by Kristie around 5:57 AM No comments: