So on Friday night, our youth at church held a fundraiser for camp money or something. The fundraiser was a night of babysitting for all those weary moms and dads in the church who needed a night out. Steven and I of course didn't need the babysitting, but it was fun to go out with all of our friends who did drop their kids off. We met the Lyles, Penningtons (otherwise known as the "Penn S's), Boergers, Westlys, Skippers, and Alexanders at Main Event. We played a little pool and bowled. Needless to say, I am not the world's best bowler. I made a B in my college bowling class. Steven did great! He got a turkey at the end (3 strikes in a row)! I had a picture of the score, but accidentally deleted it. Here are a few pics from that night. 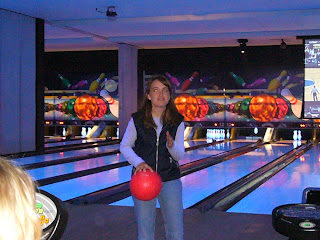 Here is a picture of Kaci Skipper. I think she looks a little fed up after her 8th consecutive gutter ball! Kidding Kaci! (although seriously, that girl loves gutterballs....) :) 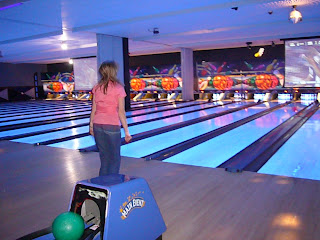 Samantha is hopping up and down, begging her ball to straighten out. She was actually a very good bowler! Who knew?! 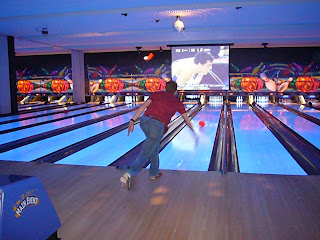 Steven has great form! He says his strategy is just to get the heaviest ball he can find and throw it as hard as he can. I think it works, he had the high score for our team. The Skippers... for those of you who don't know, when a black light and old school rap are present -Kaci has some moves! 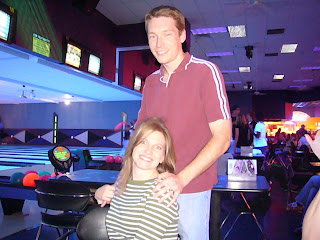 Jason and Allison are such sweet friends, I can't even think of any way to make fun of them. 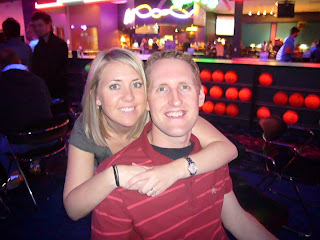 Steven and me. I don't know why I look like I like him so much, he told everyone that his nickname for me is Mrs. Buttersworth (b/c of my poofy hair in the morning). They tried to put it as my name on the scoreboard, but the only part that showed up was "Butt", so for the night I was referred to as "The Butt". Nice. 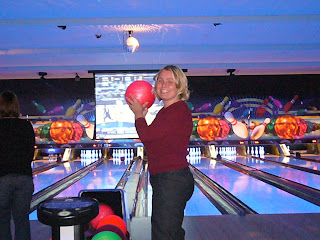 Haley about to punish some pins. We were very impressed by her skills. That softball arm is still there Haley!

Written by Kristie around 1:17 PM 5 comments:

We Are Those People 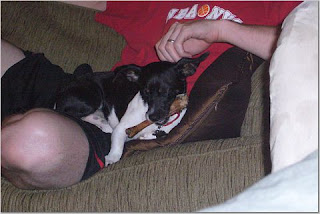 We are those people - the ones who can't stop talking about our dog. It is absolutely disgusting. We know. It's obnoxious and pathetic.... but have you seen him? I mean our little baby Dex is the sweetest baby in the world! This is a picture of him falling asleep with his bone in his mouth. We had just gotten it for him and he loved it so much he just couldn't drop it. We have about 7 million names for him. We don't crate him because we think it would hurt his little feelings (even though he's scissor-toothed a few shoes). And yes, he does sleep with us- right between us with his head on or under the pillow. Sick I tell ya... sick.
Written by Kristie around 4:17 PM 1 comment:

The Lentz's are experiencing some technical difficulties. Please excuse the lack of "bloggage".
Written by Kristie around 6:59 AM 1 comment:

And the Winner is...

Well, our blog is only minutes old and I already had to put my foot down. How could our blog be named something generic? We are going to blog with creativity or we are not going to blog.

P.S. Brett Favre is a quitter.
Written by Kristie around 4:38 PM 5 comments:

A Blog is Born

After much blog stalking, I decided it was time for the Lentz family to enter the blogging realm. Especially since we never entered the myspace world (well, not legitimately anyway... thank you April White). Steven's one request was that we call it "Blog-a-logga-dingdong"... as you can see we did not do that. Most blogs are dedicated to kids, but since we don't have any yet I'm sure friends will be reading mostly about the bizarre happenings of our day to day life. Not to mention endless rantings on our Sweet Baby Dex. That's all I have for now, until I can think of something worthy of sharing with the world.
Written by Kristie around 5:11 PM